Cormac Metal Spray, recently decided to expand their operations into the Illawarra. Looking for a suitable site in Wollongong, they took hold of the old Tolco building in Port Kembla. Upon entering the site they found someone else had recently visited. Thieves and vandals had been entering to strip out copper pipe and cabling and generally making a mess of the place – gaining entry via holes in the fence. Before moving in, Cormac needed to have new pipe and electrical cabling installed, so they also called on us to provide options to protect their new investment.

First thing we did was put up security signage and begin regular security patrols of the site. These both provide a warning to potential thieves that the site is now secured and also placed eyes on the site to check for new signs of forced entry or damage.

Next we started working on the security alarm system. The Port Kembla site had an existing alarm and parts of this were still viable. We replaced the main control panel with an updated Hills Reliance model that allowed for remote expansion devices – this is a must on a large site such as this. The Reliance alarm also allows for multiple alarm areas that can be armed independently of each other. This is perfect in if the office staff wish work back, the workshop can be armed and protected. Multiple keypads can be installed to arm/disarm the individual areas or full control can be taken from a master code pad. 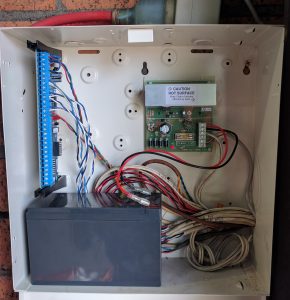 Fitted to the control panel is a Permaconn GPRS communicator. This does not rely on a phone line or internet connection and is powered by the battery backed-up alarm control panel
– meaning it’s always on. The GPRS communicator also allows for arming and disarming of up to three areas via a smart phone app. All alarm signals are transmitted via the GPRS communicator to our partnered security control centre, ensuring a quick response to any alarm activation.

In the big, open-ended workshop we ran in new security cabling and installed dual-tech detectors. These detectors use a combination of microwave and infrared technologies that cut down on false alarms, so are ideal for harsh environments such as this open ended shed.

Finally, we re-enabled the existing point-to-point yard beams as these were still in good condition. These beams create an invisible, alarmed perimeter around the site. When a beam is broken by an intruder entering the site, the alarm activates, setting the siren to deter the intruder before they proceed further into the site, while sending a signal to the control centre. Point-to-point beams cover a large area with a single device and alert of an intruder’s presence before they enter a building.

With their new home in Wollongong now protected with a Regional Security intruder alarm system, Cormac can get down to business and start to make their presence known in the Illawarra.